Welcome to the Yola Gray Antiques blog, where we talk about all that is relevant in the antiques world, as well as taking you behind the scenes to show you the intriguing and interesting aspects of the antique furniture business.

Tips for antique furniture hunting: Autumn is firmly upon us, meaning more time spent indoors, away from the foul weather… so why not optimise your interior for those cosy evenings in? While of course, we’d prefer you to get your antiques from us, we understand that we don’t have everything and, at some point, you will find yourself in a thrift store. To aid you in your quest, here are our furniture hunting tips for identifying the diamonds-in-the-rough and what pitfalls to avoid:

1 – Look for makers marks and stamps. Items of furniture made by well-known cabinetmakers are guaranteed to be of good quality and often feature an identifying mark or stamp. These can be found inside drawers or on the underside of tables.Maples, Waring & Gillows and Shoolbred are good ones to look out for.

2 – Look for good quality construction. If a drawer features quarter beading, chances are you’re on to something nice. If it’s a table you’re looking at, a single or two-plank top is always to be considered superior to a top constructed with more planks. Plus, an ornately chamfered edge implies higher quality over something plainer.

3 – Don’t be put off by primitive construction methods. If an item looks a little rickety, it might be something really old – look for wooden peg construction, which is a method that died out around the end of the Georgian period. Another thing to keep in mind is patina, particularly with oak: the older it gets, the darker it becomes, so if you find something made from oak that is a dark oxblood colour, it’s going to be old!

4 – Don’t be put off by veneer. Veneer in this day and age has garnered something of a stigma, being cast as a sign of cheapness or poor quality. When it comes to antique furniture, however, nothing could be further from the truth. Genuine antique veneer will have been applied using skills and techniques that require a high level of expertise. Look for veneer that is intact, and if you find something with mirror-matched or really showy, symmetrical veneer, you’re onto something.

5 – Carvings. If an item has highly detailed carvings, a lot of skilled work will have gone into the piece, and this will have a large say in the true value.  However, during the Victorian period in England, some early oak furniture was carved during this period, because it was fashionable.  Therefore, the carvings may not always be original, and will require closer inspection.

6 – Inlay. Inlay is always a sign of quality, especially when there is lots of it, but be prepared to look closely – cheaper (often reproduction) items sometimes replicated inlay by simply staining or painting the wood to create a similar effect. If this is what you find, avoid it like the plague. Genuine inlay is like a mosaic made from tiny pieces of wood or sometimes brass or mother-of-pearl. Look for the tiny gaps between the individual pieces.

7 – Consider cost: Our final antique furniture hunting tip is don’t just think about the price of an item at face value – if the item requires restoration, this will undoubtedly add to the expenditure. Price is also doubly important when thinking about buying something at auction. On top of the aforementioned potential need for restoration, auction houses also charge between 20% – 30% on top of the purchase price, and up to an extra 5% if you bid for the item via the internet. You could also be a little dropped-on if you purchase something at auction without first viewing it, only to later discover it has problems that weren’t mentioned – especially considering you can’t return something to an auction house!

It’s a big, antiques-filled world. Hopefully, these antique furniture hunting tips will arm you in your travels. Be safe out there!

a brief history of marquetry

With the vast array of furniture that exists, there is, of course, great variety in the types of decoration one can find. Here, we take a closer look at a particular type of decoration known as marquetry.

In this blog, we’ll take a look at marquetry. In essence, marquetry is defined as thin layers of veneer applied to a piece, to form patterns, designs or pictorial scenes. According to some sources marquetry of a type has been dated as far back as Egyptian and Roman times, only to disappear and later resurface in the 16th Century, in the cities of Florence and Naples. Marquetry techniques were also developed in Antwerp, the craft later spreading to France in the latter half of the 17th Century. Around this time, cabinetmakers Pierre Golle and his son-in-law André-Charles Boulle developed the technique known as Boulle work. Boulle work involves tortoiseshell, brass and pewter, creating foliate and arabesque designs. The crafty also made its way over to England at the time of Charles II’s restoration is 1660. However, it did fall out of favour in England, for a time, as Queen Anne style furniture rose to prominence there. It would later return in the late 1760s as cabinetmakers such as Thomas Chippendale popularised Neoclassical styles. Marquetry again became popular in late Victorian and Edwardian furniture, with many pieces of furniture made during that period bearing marquetry decoration.

Marquetry has been responsible for some truly spectacular pieces of furniture. Of particular note is the Bureau du Roi, which was made by Jean Henri Riesener. 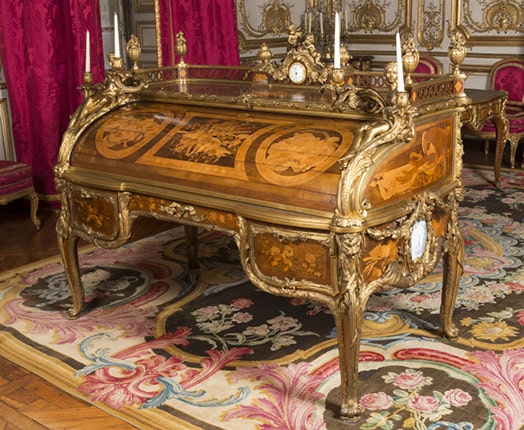 Here is a quick peek of ongoing restoration projects, showing you items that are going to be gracing the front page of the website in the not-too-distant future.

Clockwise from the top left: A Georgian oak chest of drawers, awaiting a general spruce-up to the finish; an adapted Georgian cupboard just pending a clean and a polish; a Georgian style mahogany housekeepers cupboard, which just needs a clean and a check-over, before it can be photographed; a Victorian high back upholstered armchair, currently at the upholsterers; an Edwardian duet stool, also in need of some new upholstery. 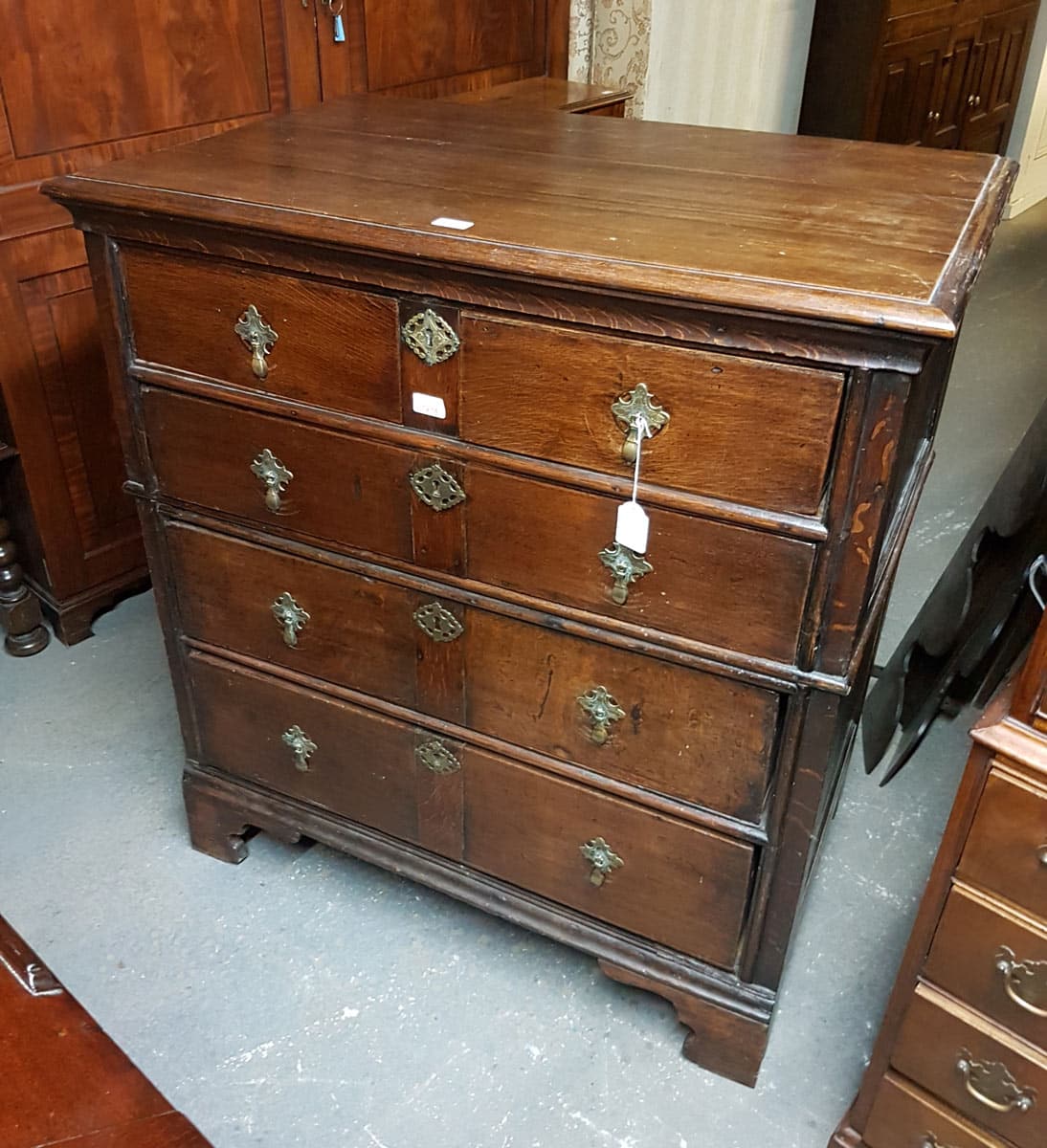 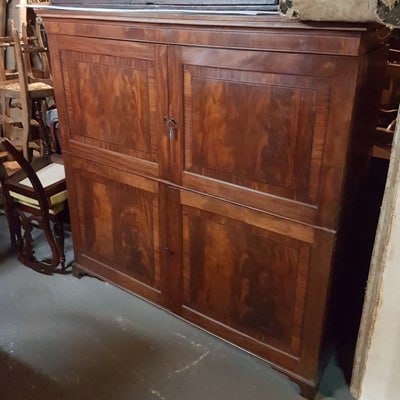 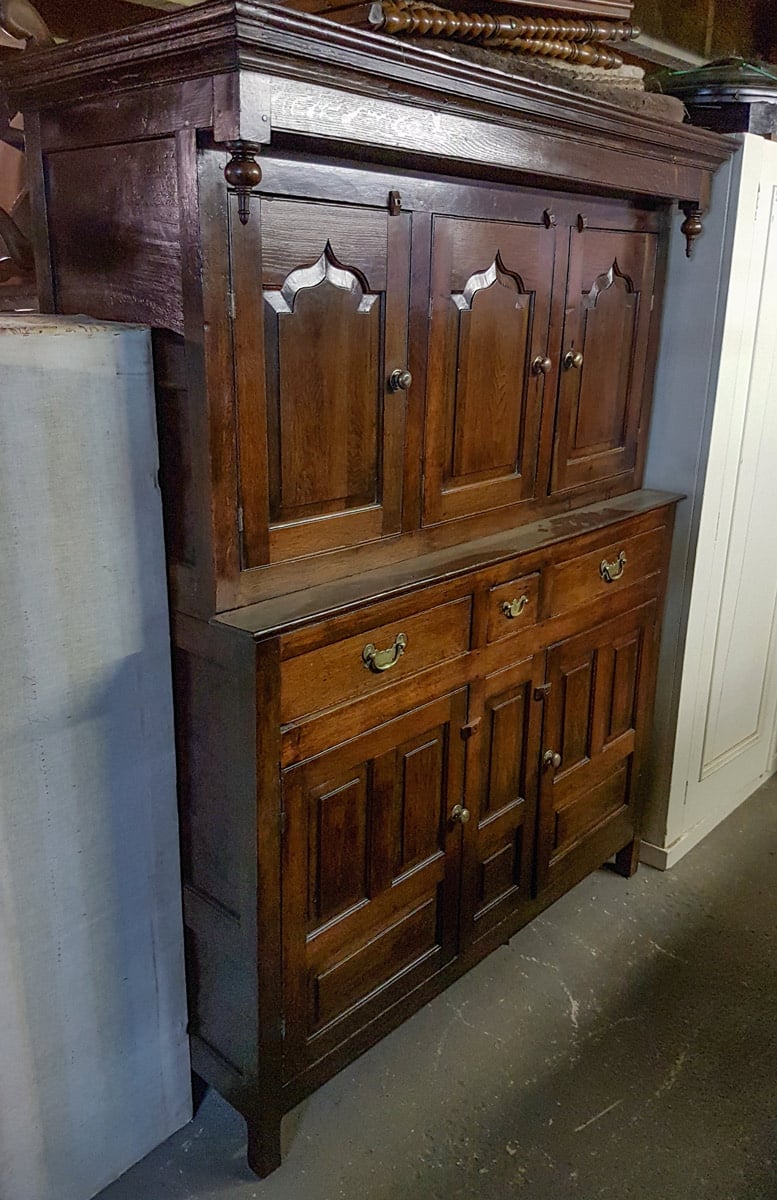 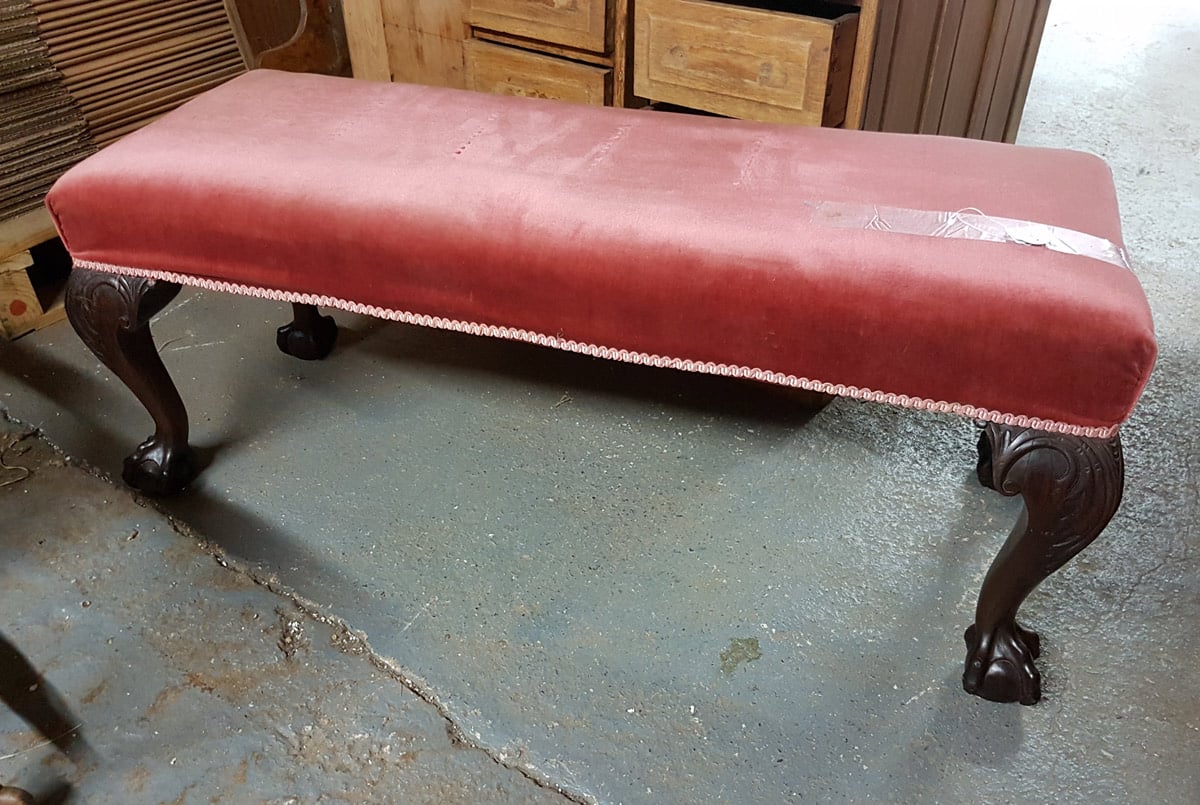